The ‘Tandav’ Of Censorship over Otts 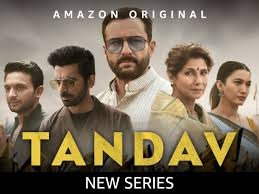 FIRs have recently been filed in India against television shows and movies that are being streamed on online platforms. According to the complainants, these shows contain scenes that ridicule Hindu deities, criticize the faith and are being deliberately made to spread propaganda.

These debates are provoked by strong religious feelings that have allegedly been hurt by the content of a few films and television shows, including Tandav (2021), The Suitable Boy (2020)[1], and Padmaavat (2018)[2].

Tandav appears to be loosely based on recent political scandals that have arisen throughout the world. Despite this, the producers have stated that the events are a work of fiction. Following the show’s portrayal of Hindu deities in a negative light, a flurry of debates and altercations erupted. Various politicians and opposition parties have retaliated, using social media and even judicial forces to try to halt the show\’s airing. Following the intervention of law enforcement and state governments, the show’s creators decided to remove scenes that referenced Hindu religion and culture as satire.

Several people have accused the show of inciting communal strife and hurting Hindu feelings. A scene in which Mohd. Zeeshan Ayyub performs a college comedy, according to the allegations, insults the Hindu god Shiva. Tandav viewers took to Twitter shortly after its release to demand that the series be banned, using the hashtag #BanTandavNow.[3]

The complaint, filed under Section 200 of the CrPC[4], demands that the accused persons be summoned, tried, and punished, alleging that the web series is causing communal strife and harming Hindu sentiments.

Legality of The Complaint

Being sensitive to something that contradicts one’s own beliefs is entirely subjective. The Constitution debates these cases critically, rather than adhering to specific sentiments expressed by individuals.

In either case, religious groups linked to the growth of Hindu nationalism have an impact on the decisions taken by the forces that be in our land. As a result, censorship, which is typically associated with conventional media, has found it’s way into online streaming platforms, which are a more autonomous type of media.

Bhartiya Janata Party MP Manoj Kotak wrote to Prakash Javadekar, the Minister of Media and Broadcasting, requesting a ban on the series for reportedly ridiculing Hindu deities. Numerous organizations and people have claimed that Hindu gods and goddesses have been ridiculed in the Tandav web series. [7]

In Maharashtra, MLA Ram Kadam tweeted demanding that Lord Shiva’s mocking role be deleted and actor Mohammed Zeeshan Ayyub apologized. Unless required modifications are made, Tandava will be boycotted. He also suggested banning Tandav on Twitter and said that just like there is a system of sensors for the review of films and serials, the review of series on the OTT channel should be equally arranged.[8]

Tandav’s creators issued an official statement in which they unconditionally apologized for inadvertently injuring religious feelings. Ali Abbas Zafar said in the statement that they have been closely watching the controversy and that the series is a complete work of fiction. In Uttar Pradesh, at least three FIRs have been filed against the producers and artists of ‘Tandav’. Many politicians, including Mayawati, Kapil Mishra, and others, denounced the show for “insulting Hindu gods” The defendants petitioned the Supreme Court for temporary immunity from detention. The Supreme Court declined to grant them relief, potentially requiring them to seek relief from courts in states where such FIRs have been filed, making them vulnerable to detention, at least theoretically.

Laws in India for Censorships of OTT Platforms

There are no regulations or guidelines governing OTT channels so far in India. With the government agreeing to put under its jurisdiction all video, audiovisual, and news material from these online content providers, the very first task for the OTT platforms will be to retain close control over their content.[9]

This step by the government may also mean that these channels will also have to apply specifically for the content they choose to stream to be accredited and accepted. Since most OTT sites have content that could otherwise be censored by the certification boards, this could cause controversies. As these platforms have also opted to produce movies and documentaries on politically controversial issues, OTT platforms are likely to reject plans to censor their content. In India, with most creators, directors, and artists showing firm opposition to the repression of creative freedom, the control of such sites has been extensively discussed. There has been a growing apprehension on the Internet of a ‘license raj’.

The tech-related aspect of OTT platforms is regulated by the Information Technology Act, 2000.[10]

Since OTT platforms qualify under the IT Act as intermediaries, they come under the 2011 Information Technology (Intermediaries Guidelines) Regulations[11], which describe the due diligence process for online content publishing. In its order, the Delhi High Court explained that provisions of the IT Act relating to the publishing or dissemination, in any electronic medium, of obscene/sexual/illegal content will extend to OTT platforms. Also, the Supreme Court required the central government to take care of the digital content posted on these media; there was, however, doubt as to what regulatory authority regulated the online content.

Previously, a self-regulatory voluntary censorship model, the “Code for Self-Regulation of Online Curated Content Providers” was proposed by the representative body of OTT platforms, i.e., the Internet and Mobile Association of India (IAMAI).[12]This Code prohibited the broadcast of content that dishonours or insults the national flag/embassy spreads child pornography, induces sacrilege, instigates extremism, or However, because of the lack of impartial third-party viewpoint, a proper description of banned content, and an established Code of Ethics, the Ministry of Information and Broadcasting rejected it. Notification of 9 November 2020 empowered the Ministry of Information & Broadcasting to regulate Over the Top (OTT) Platforms through the Government of India (Allocation of Business) Three Hundred and Fifty-Seventh Amendment Rules, 2020.[13] It will now be operated by the Ministry of Information and Broadcasting prior to the OTT channels that fell under the Ministry of Electronics & Information Technology. It is uncertain if this Code would be changed or new legislation will be formulated by the Government, which suggests that these OTT sites will now have to apply for content certification and approval. It is also uncertain if a strict Code of Conduct will be implemented by the Ministry of Information and Broadcasting or whether a broad structure under which OTT platforms can follow codes of self-regulation will be informed. The condition can be explained only based on the notification of the laws.

Other such Incidents in Past

Regulation and censorship have many advantages and disadvantages. In the positive end, authorities’ rules prevent hate speech and incitement to violence, which will help society preserve peace. Despite these benefits, legislation has the potential to stifle freedom of speech, which is a constitutional right in a democratic nation such as India. It has the potential to stifle the free flow of data, ideas, imagination, voice, and language.

However, as the examples above illustrate, the crowds will often decide what is “right” or “wrong” resulting in heated debates and scandals that aren’t taken up by regulatory bodies.

Even if regulatory authorities do not consider a particular type of media to be malicious, groups unified by hyper emotionality will create a stir and file complaints against it. Typical examples have seen abuse and attacks directed against media outlets who hold opposing ideologies or viewpoints, undermining viewpoints that can be freely expressed in a democratic nation.

Tolerance for differing viewpoints that do not violate human rights standards, as well as tolerance for those who hold opposing viewpoints, is essential for maintaining the mutually based powers of freedom of speech and social stability. One of democracy’s most valuable gifts is the freedom to express yourself, but not when it silences or threatens the voices of others. As a result, total freedom of expression can be negative. Using voices that only reinforce one’s critical, non-harmful opinion—whether by humour, video, poetry, or literature—should not be criminalized or censored as a way to combat hatred.

[4] Case registered under section 200 crpc – Online legal advice in Complaint, Kanoonirai(2015), https://www.kanoonirai.com/case-registered-under-section-200-crpc/ [5] Section 295A of the Indian Penal Code — The Centre for Internet and Society,

[6] IPC Section 153A – Promoting enmity between different groups on the ground of religion, race, place of birth, residence, language, etc., and doing acts prejudicial to maintenance of harmony | Devgan. in,

This article is authored by Samarth Jain, student at Institue of Law Nirma University.