HomeLegal BlogsImportance of Judiciary during a Health Emergency
Legal Blogs

Importance of Judiciary during a Health Emergency 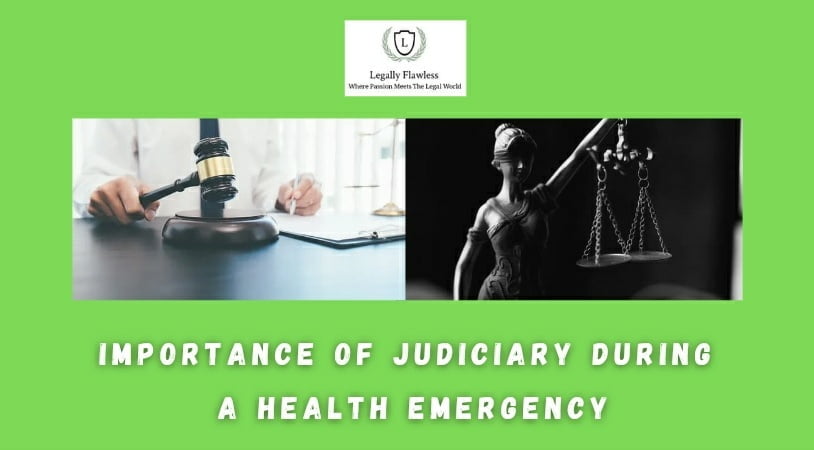 “The people are only legitimate foundation of power, as it is from them that the constitutional charter, under which the several branches of government hold their power, is derived.”

Legislative, Executive, and Judiciary are the 3 pillars of Indian government which coordinate and maintain a balance between themselves for the smooth functioning and work for the benefit and welfare of the people. Legislative as a whole make laws, the executive see that the laws are enforced made by the legislative and the judiciary interprets and works on its true sense. And now on we will see into, a judiciary which is one of the three pillars.

Judiciary, word came from the Latin word judex which means “judge.” It is a mechanism of dispute resolution by a system of courts which in real sense applies relevant laws and relevant facts to reaches the conclusion. Courts are majorly divided into Supreme Court, High Court, and District court and the matter of concerns are also assigned to deliver justice to every single citizen in every aspect, and also there are 448 articles in 25 parts and 12 schedules and 104 amendments are done until this date, for fair and unbiased judgments. On 26 January 1950 Indian Constitution was written, which is one of the largest written constitution, by Prem Behari Narain Raizada. It is the supreme law of India and empowers the judiciary to act as a guardian of the law. But the court does not have unlimited power as the doctrine of constitutionalism is applied to protect the basic fundamental rights and to control its power, role, and functions. The major provisions which deals with the major responsibilities are:-

Several other parts deal with the duties and responsibilities of the court.

A Health emergency is a situation when WHO (World Health Organization) declares risk to public health through the International spread of disease. This is also termed as a global pandemic which is due to COVID – 19 as every country is suffering and are at great losses as lives are lost and are at risk, people are panicking as there’s neither enough money nor enough resources for the treatment. And also the economy is falling day by day as lockdown is imposed, people cannot go outside and earn a living, because of this life-threatening disease and since the world has encountered such a high-level pandemic for the very first time, it’s difficult for them to cope up. But still, the country’s are united and helping each other in these difficult times. Also, some acts and rules are created by the government to get some relief and to deal with it efficiently, such as:-

Disaster Management Act, 2005: National Disaster Management Authority is the central head and prime minister as the chairperson. It lays down certain policies, plans, and guidelines for the management of disasters. Certain amendments were made in 2019 which deals with Biological Department and Health Emergency. The Nationwide lockdown was imposed under DM Act to take measures for ensuring social distancing to prevent the spread of COVID 19. Moreover, over 30 guidelines were issued by the Ministry of Home Affairs. And to alleviate social sufferings, minimum standard of relief to each person affected, including relief in repayment of loans or granting of fresh loans temporarily to ease them in these difficult times.

Epidemic Disease Act, 1897: Amendments are made and the action is invoked due to current COVID -19 situations on April 2020. The Ordinance amends the Act in good faith for the protection of healthcare workers fighting this epidemic disease and extends it to the central government to control and prevent the spread of an epidemic.

Many other laws are made for combating the present situation; all the states and union territories are handling the situation in their way, by making their laws according to the needs of the citizen and the state.

Judiciary is playing a very important role as by using the power they possess, responsibilities towards a citizen, although having some limitations which are discussed as below:-

1. Powers of a Judiciary: Every citizen has their fundamental rights which need to be protected, and constitutionalism provides the power of judicial review to restore rule of law in the country. Article 19(1) (d) provides that the citizen of the country has a fundamental right to move freely throughout the territory of India.  But during “Lockdown” the government has taken away the right provided, i.e. Right to Free Movement. Thus, showing their power and enforcing it. Also, several rules and acts are made by the government, such as the two mentioned above by using their powers to curb the difficulties and help the citizens.

2. Responsibilities towards Citizens: During harsh times, different bodies constituting    the judiciary as a whole and other stakeholder have also been affected by the pandemic, but they are fighting like any other frontline warriors. To delay Justice is Injustice, but the lockdown is imposed, therefore the courts are not able to work in offline mode, so the courts are functioning and dealing with the cases and problems through digital mode. Even advocates and legal advisors are delivering their duties ensuring the justice delivery system of our country to be intact. As everyone is inside their home, so the no. of cases are increasing rapidly, especially the cases of domestic violence, rape, etc so it’s the judiciary has to protect the rights and treat everyone with equality, as the saying goes “1000 culprits can escape, but, one innocent person should not be punished.”

A case where Supreme Court suo motu took note of fears over the COVID-19 pandemic in overcrowded prisons in India and on March 16 highlighted the difficulty of observing social distancing among inmates, where the occupancy rate is 117.6%, and instructions to prevent the spread of COVID-19 in prisons in India have been issued. The establishment of solitary cells in Kerala prisons and the decision by the Tihar Prison Authorities to examine new inmates and place them in different wards for three days are seen as appropriate preventive measures to cope with the current health crisis in prisons and youth welfare centers. Quarantine rooms can have tightly locked doors or be watertight and airtight compartments, but the rays of justice from courtrooms are empowered to invade them. In this case, Supreme Court kept up with the responsibility and fulfilled it.

3. Limitations of a Judiciary: Although, the judiciary is trying their level best to help in each way out, there are some limitations, as this situation is witnessed by everyone for the first time in the entire history. Judiciary should monitor and ensure social, political, and economical rights but was not able to complete the duty as during the COVID-19 pandemic, we have seen many measures such as the not very well planned lockdown and in-actions like the initial indifference to migrant workers on the part of central and state governments have led to a commitment to social and economic justice and politics. Under article 14 of the Indian Constitution says “The State shall not deny to any person equality before the law or the equal protection of laws within the territory of India.” But the pandemic, we saw that in recent times during the pandemic, regarding injustice towards day laborers, migrant workers, preventing corruption in the rationing system, etc., governments failed to establish the “rule of law” many times.  As they were not given enough time to move to their families, in their respective states which also resulted in the loss of few lives. Also in Article 21 of the Indian Constitution says “No person shall be deprived of his life or personal liberty except according to procedure established by law”. But this dignity has been compromised at some stage in the pandemic via way of means of the authorities numerous instances like death by walking miles without meals at some stage in lockdown, failure in lots of methods in phrases of imparting proper assistance like meals, refuge, and more secure preparations for migration to the needy and distressed human beings at some stage in the lockdown, etc.

People have immense faith as justice delivery and doing right for them is always the motto of every court, but there’s the supply of oxygen tankers in black, doing fraud as there is a shortage of almost every medical supply which results in the supply of medicals in the black market, and the courts are not able to deliver the duty and to give justice to the citizens who are suffering, to the losses. Courts to deal effectively with the situation can form committees at different levels as at district, state, and the core, which will deal only with the problems associated with COVID-19, and to find solutions for them, which can be supervised by the courts at different levels.

The Heart and Soul of the Constitution of India Article 32 empowers the Supreme Court to make orders, and orders to enforce fundamental rights, and Article 226 authorizes the Supreme Courts of respective states to make orders, orders and orders to enforce fundamental rights and others issue rights. And during times of pandemic, the judicial system resolves public health-related disputes. Public health authorities should anticipate the need to explain to the courts the legal and factual reasons for their actions. Likewise, the authorities and their attorneys should develop a thorough understanding of the court’s jurisdiction, practices, and protocols. Public health officials need to cooperate with the courts.