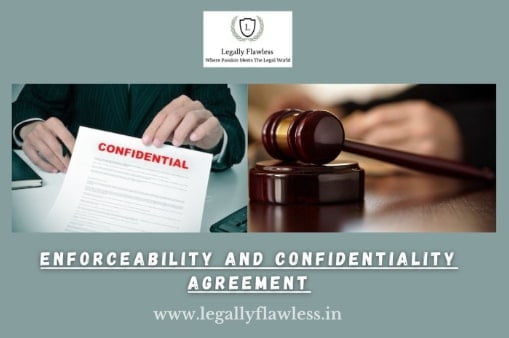 What is a Confidentiality Agreement?

With the growing significance of Intellectual property in the present scenario, its security has turned into a notable area of concern. To gain advantage and stay relevant, and a business needs to ensure that its confidential information remains in its domain and not emanate into a competitor\’s hands. To secure the information, the employer resort to using the method of Non-disclosure Agreements (NDA). A non-disclosure agreement/ confidentiality agreement is a legally binding agreement in which the party(ies) to the agreement accord that the sensitive information obtained by them will be kept confidential and not made available to others as per the contract terms.[1] A nominal benefit over competitors can make a huge difference. A business should not lose it for the non-maintenance of NDA.

The NDA(s) are formed to confide the trade secrets which the Delhi High Court defined in the case of Ambience India Pvt. Ltd. v. Shri Naveen Jain as;

“A trade secret is some protected and confidential information which the employee has acquired in the course of his employment and which should not reach others in the interest of the employer. However, routine day-to-day affairs of an employer which are in the knowledge of many and are commonly known to others cannot be called trade secrets. A trade secret can be formulae, technical know-how or a peculiar mode or method of business adopted by an employer which is unknown to others.“

After a discussion about what NDAs are, a question arises: Are these agreements legally enforceable? Do they hold power to be trialed in the court in case of its default?

In India, the non-disclosure/confidentiality agreement is enforceable and valid only in the conditions where the agreementhas been registered under the Registration Act of 1908. For the agreement to be a valid enforceable document, it should be stamped and registered. The stamping process is a necessary requirement, in devoid of which the document will not have the power to be accepted in court under normal circumstances.[2]The rate of the stamp duty for a non-disclosure agreement differs from state to state but is normally in the range of – 20 to 100. As per the Registration Act,1908, the non-disclosure agreements can be registered by advancing to the office of the Sub-Registrar. However, the detailed rules and the charges for getting the agreement registered from the office of sub-registrar differs from state to state.[3]

Are Non-Disclosure Agreements Restraint to Trade?

Although the non-disclosure agreements do not find an explicit mention in the Indian Contract Act, 1872 but it can be argued to be covered within the ambit of \’restraint from trade\’ and hence be declared void. Section 27 of the Act states that;

Therefore, it can be asserted that the NDAs are negative covenant and hence restraint of trade. Negative covenants are covenant preventing certain activities unless agreed to by the bondholders.4However, in the case of Niranjan Shankar Golikari v. The Cenury Spinning and Mfg. Co.,the Supreme Court ruled that the negative covenants in the period when the employee is exclusively working under the employer are not to be amounted as restraint of trade and thereby are not covered under section 27 of the Indian Contract Act,1872.

Specifically, the courts have also ruled that the non-disclosure agreements are not does not amount as a restraint of trade. In the case of VFS Global Services Private v. Mr. Suprit Roy, the Bombay High Court ruled that a clause which prohibits the employees from revealing confidential commercial and trade secrets will not be calculated as a restraint of trade. The clause will not have an effect leading to restraining the employee from performing a lawful trade, profession or business as mentioned in section 27 of the Indian Contract Act, 1872.

The growth in business and trade should also be supported by the equal protection of rights in its broadest form. The Non-Disclosure Agreement or confidentiality agreement aids in providing the same as it leads to the protection of valuable/confidential information of any person or business to be secured from being disclosed and causing harm or loss to the original possessor of the information.

It can be concluded from the article that the courts have moved in the way of drawing a line between the rights of an employee and that of an employer. If the information is not available in the public domain and an NDA is enforced regarding the same, then the NDA can be legally enforced. Therefore, the NDAs act as a protector of original ideas and information.

This article is authored by Kanishk Joshi, Student at Rajiv Gandhi National University of Law, Patiala

What are the types of NDAs?

NDAs are primarily classified into three types. They are as follows:-

Unilateral NDA: The confidential data or information will be shared by only one party.

Multilateral NDA: As the name suggests, multiple parties are involved but only one party shall share the confidential information and the others are bound to keep it private.

What happens if a confidential information is deliberately disclosed?

Is there any time period imposed on NDA agreements?

NDA agreements can either be imposed for an indefinite period or with a time restriction where the agreement expires when the time period has been elapsed.

What kinds of information are protected under the NDA agreements?

It protects both ordinary confidential information and trade secrets. Ordinary confidential information includes general technical data to promotional or commercial data, inclusive of client database. Trade secrets on the other hand are critical components to a company’s profitability and success. Tremendous efforts are placed to safeguard these secrets. The best example is of trade secrets is the formulation of Coca-Cola, the trade secret has been preserved for over a century now.

Is registration of a NDA agreement mandatory?

As per the Indian Contract Act 1872, registration, notarization or signature of an NDA agreement is not mandatory but it is recommended to register the same in order to avoid legal disputes.