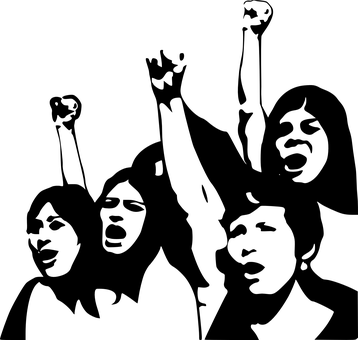 Among all the forms of government, our Nation chose a democratic one, where the People of India are the main stakeholders. The role of citizens is not limited to electing a government every 5 years but to raise their voices whenever the government seems getting diverted from the path. It is where the role of protest comes into play. The Protest is an essential component of democracy and this essentiality as well as the need to maintain peace in the society is very well recognized by our Constitution makers and by our Honorable Supreme Court from time to time.

TheProtest is one of the ways through which people express their displeasure with a decision, policy, law, rules, etc. brought by the state. The people in a protest want their voices to be heard by the state and actions are taken accordingly. Protest can be through many forms like silently protesting, omitting to do something by a large number of people, to sit and raise dialogues or banners (or say dharna), etc.

When most people think of protest, the sight that usually comes into mind is something related to violence or an unpleasant situation and often the protesters are seen as a group trying to disturb the peace of society. It’s not always the case. Public protests are a sign of healthy democracy, as it shows that people are able and conscious enough to raise their voice about what they need, what is wrong and right for them as part of the society, after all, whatever the government is bringing whether it is a policy, law, rules, it is ultimately for the people, in the end, they are going to be affected by it. This sign of healthy democracy is truly validated when their voices are heard by the state and whatever happens thereafter, takes place through the participation of citizens and state, discussion, and deliberation on the contended topic.

The culture of protest is not new in our society or for any society; it has been a popular form of demonstrating for a very long time like during our independence struggle there were many protests including the Civil Disobedience Movement, the Swadeshi Movement, rallies against the Colonial Government, the Chipko Movement, etc.

When these three rights are taken together, we derive the Right to Protest.

So, the right to protest means that all the citizens of India have the right to voice their opinions, views, ideas through means, as discussed above, by peacefully associating or forming unions but also adhere to the restriction that they shouldn’t carry any arms during such demonstration.

Supreme Court from time-to-time have recognized this right to protest as in Ramlila Maidan Incident v. Home Secretary, Union Of India & Ors.[1], it held that, “Citizens have a fundamental right to assembly and peaceful protest that cannot be removed from arbitrary executive or legislative action.” Further, in Maneka Gandhi v. The Union of India [2], J. Bhagwati observed that, if democracy means the govt. of the people, on the part of the people, it’s obvious that every citizen must have the right to participate in the democratic process & allow him to intelligently exercise his rights to make a choice, a free & general discussion of public issues is essential.

Article 19(2) talks about the restriction and the specific 8 grounds for the restriction that can be put on the right of freedom and expression are given in Article 19(1) (a). The list given is exhaustive and any act or law that infringes the right given in Article 19(1) (a) has to come under one of the grounds mentioned here in it. This is for the purpose that the right to freedom of speech and expression is not misused by the citizens and under the shade of this right do not say something harmful in nature to the society, public in general, and to the nation as a whole.

The term means that the restrictions imposed should not be vague, arbitrary, or excessive beyond what is required to achieve the stated object. For example, suppose if a man is creating a disturbance in his office, he can be restricted to enter the office, but he can’t be restricted to go anywhere and to be at home all the time because that would amount to too much restriction beyond what is required. It should be checked whether the option of putting less strict restrictions is available, to achieve the objects, or not, if it is then it should be given priority.

It can be defined that the tranquility, peace, public safety, and even tempo of an area or community or a living is maintained, it also includes the laws established by the state. Any act that violates, the peace of a locality would amount to creating public disorder or disturbing public order. It is important that “public order should not be seen as synonymous with “law and order” and “security of the state”. The determination of this is done by determining the nature of gravity of an act or says its potentiality to cause harm or by determining the degree of harm it causes and its effect on the society or general public.

Any person, who harms anyone’s reputation whether through writing, posters, print, or by spoken words, commits the offence of defamation. Such harm to reputation is evaluated according to the right-minded people or an average reasonable person. It can be against a company or association, deceased person if such a statement affects the close relatives.

Incitement of an offence

It means to encourage or excite a person to commit an offence, whether through any spoken words, in writing, or through any act. Such offences must be covered under IPC; the mere possibility of having certain characters of any offence under IPC doesn’t amount to offence in particular.

To determine whether an act violates decency or morality, Hicklin’s test developed in English judgments along with the criteria of community standards developed by the Supreme Court of India is used. According to this, anything that creates an obscene, corrupt effect in the minds of an average person whose mind is vulnerable to immoral influences, by application of contemporary community standards of a society, may amount to violating decency or morality of the society or the person affected. Also, such acts or material must lack any scientific, literary, educational, political values. [3]

So, any act that happens in a protest and that is within the parameters of the above-explained expressions or under Article 19(2) scope, gives power to the state to put restrictions on such a protest.

We have seen a rise in the general consciousness of people regarding their rights and how the government is functioning, not only in India but around the world, whether it’s the protest in Lebanon about tax on WhatsApp usage, the Hong-Kong protest against the extradition bill, the Black lives matter movement or the CAA and the ongoing farmer’s protest in India.

The thing common in all the protests that have attracted criticism from across the countries is the violence or brutality that police are resorting to. We saw the use of tear gas, lathis to disperse the protesters during Shaheen Bagh as well as the farmer’s protest. These types of extreme options are reported only when the protest violates any of the grounds of Article 19(2). Many protesters are even losing their lives and numerous protesters are charged with sedition.

Now, looking at the role of protesters, some of them are creating troubles for all others who are protesting peacefully in the right way, like the use of guns in the CAA protest, use of ‘Talwar’ or sword during the farmer’s protest.

But, the way the protests are being handled in our country, shows the abuse of the right given to the State under Article 19(2). Using laws like UAPA, detention laws to arrest the protesters and to tag them ‘anti-nationals’ just because they have raised their voice against something which the society doesn’t want to accept, shows the weakening of the democracy in India.

The right to protest has been an integral part of human rights for a very long time but the way of its handling has changed. Earlier, when a protest used to happen, it was addressed by listening to the demands and carving out a way for overall development by the authorities, what happens now is nothing but reminding people again and again, that the country in which they are living is ‘Democratic’ on papers only and freedom of speech and expression should be used when raising voice in support and not in dissent. Like every life matters, so does every Right including the Right to Protest.

This article is authored by Meghna Pareek, student at Institute of Law Nirma University, Ahmedabad.